Photography, like anything other skill, is something that you improve with practice, repetition and experience. There are 5 things that you can learn today that will instantly make you a better photographer.

I have a YouTube video on this subject as well, if you are more of a visual learner.

When you photograph a subject, whether it be a person, item or landscape - you generally are inclined toward shooting it at eye-level. I've often found that experiment with perspective offers a unique, fresh perspective on a photo that might otherwise be mundane. Are you shooting a model? Try getting on the ground and shooting up, you might get a much more visually interesting shot. Get high, get low, experiment.

Tip 2: Shoot through Something

When I'm out shooting, a simple trick I often use to make a photo more interesting, is to add something to the foreground. Take this image below as an example. I was taking photos of Downtown Los Angeles with shrouded by Palm Trees. To add even more depth, I added a mirror and grass to the foreround, by hand-holding them directly in front of the lens. Adding a foreground not only adds depth, but added context to the photo, making it more visually striking.

In some photos, focus on the not-so-obvious adds to the story. Take the photo below of me shooting Carleigh in East Los Angeles. If we were in focus, it would be a fine photo - but boring. There wouldn't be anything necessarily interesting about it. By keeping the background in focus, however, an element of mystery and intrigue is added to the photo. Try this on your own photos.

Tip 4: Shoot into the Sun

It's conventional, perhaps logical - that one would shoot a subject away from the sun, using the sun as the light source. However, sometimes the opposite is true. Shoot into the light. If you want a fancy way to say this - it's called contre-jour. French for against daylight. is a photographic technique in which the camera is pointing directly toward a source of light. Shooting into the light can transform dull, lifeless landscapes into something a lot more striking.

Tip 5: Move from the Middle. Off-Center your Subject.

Sometimes you can really bring your picture to life by simply moving your subject away from the middle of your picture. Take this image below of Carleigh standing on a rock in a Malibu Beach. If I were to shoot her centered, the symmetry of the photo would be off, as the rock to the left would be cut off. Shooting a subject off-centered reveals more information and details about the scene, which are important for telling a story. Something I want to mention that goes hand-in-hand with this is the rule of thirds. If you're a beginner, make sure to really learn this concept - as it is basically a must when trying to improve and really absorb the skill of composition.

And that's it! Hope you enjoyed these tips. Feel free to connect with me on Instagram and watch the video version of this on my YouTube. 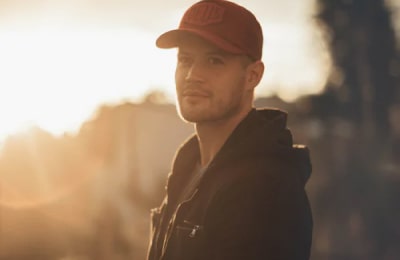 Hi I’m Roberto, a designer, photographer and creative based in Los Angeles, CA.

Thank you! Your submission has been received!
Oops! Something went wrong while submitting the form.